Turf Crew is pleased to announce that the newly formed association Örebro Turfers (not to be confused with Örebro Turfförening) will host the unofficial world championship in Turf - Turf Bonanza 2021. The event will be held on September 4, in Örebro Sweden. Save the date and book travel/accommodation already now. More information about this long awaited event will be released in springtime. Welcome to Örebro! 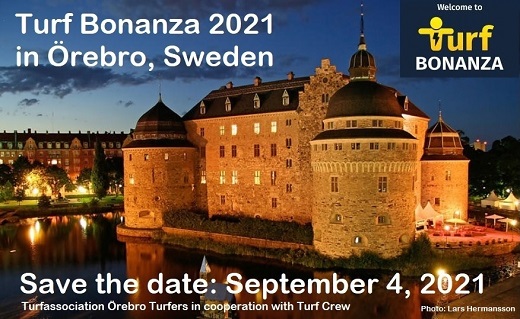 Turf Östergötland welcome everyone to its first open event ever 24 april 2021.

The event will be covid-19 secured and the location is in Linköping.

Our goal is to host the Bonanza in the future, the event will be a good practice for us and you will be familiar with a Bonanza area

The finalists for Turf Award 2020 have been selected from all the nominations. Now it is up to the Turf community to cast their votes and decide who will win theprestigious awards. Vote here!

Turf Award is awarded to turfers who have made significant or particularly attentive achievements during the previous year, or have been involved in an especially noted or spectacular zone takeover.

Candidates are nominated by all turfers who also can participate in the final voting round to appoint the winners. Turf Award is handed over to the winners by Turf Crew at the Bonanza banquet in Örebro September 4, 2021. Turf Award will be awarded in the following categories:

Awarded to the Turfer who, for example, got the most gold medals, monthly medals, has taken the most zones, unique zones, regions or equivalent in 2020.

Awarded to the Turfer who started turfing as a newbie in 2020 and has made the fastest progress during the year.

An open category to nominate a Turfer that exceled in an exemplary way without any connections to an individual Turf performance. This award can be given for anything, for example: efforts to spread Turf, marketing, organizing Turf events or a Turfer who has helped and supported others in a special way.

Awarded to the Turfer, who has completed one of the most notable or spectacular zone takes in 2020.

In February 2021, all turfers have the opportunity to submit proposals on who should be nominated for the Turf Award in the different categories. A nomination proposal must include nickname and a brief motivation based on nomination criteria abowe. Link to the Google forms for proposing candidates can be found here (open up January 26 and closes February 25 2021):

Voting procedure and announcement of winners

In March 2021, Turf Crew nominates a maximum of five candidates in each category. During April all turfers will be given the opportunity to vote for which of the nominees who should be awarded the Turf Award in each category. Link to voting form can be found here (open up April 1 and closes April 30 2021):

The voting score determines who will be the winner of Turf Award. During the Bonanza Banquet in Örebro on September 4, 2021 the winners will be announced. If the prize winner is physically present they will have the opportunity to leave a short comment.